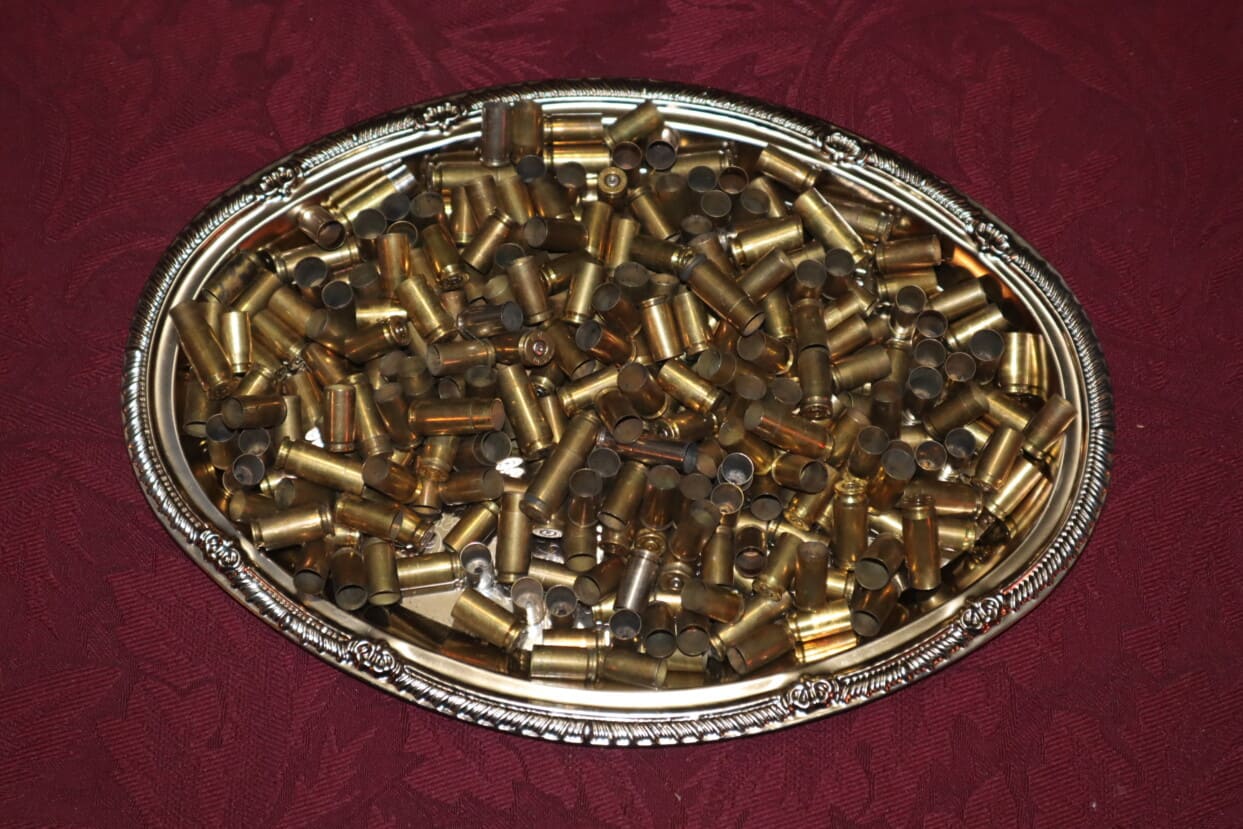 We choose to use guns for a variety of reasons: self defense, hunting, to improve our aim, for fun, or as a way to prepare for an uncertain future. Choosing which gun to use for each activity includes consideration of the caliber you need.

European ammunition uses a metric designation, e.g. 9mm. Americans state caliber in parts of an inch, e.g. .357. Extra words or letters after the number give more information about the powder load or the origin of the caliber.

From there it gets complicated. If you put a caliper on a .38 Special and a .357 Magnum, you will find they are both .357 inches in diameter. The difference is in the length of the case. .357 Magnum is longer in order to fit more powder in the case, for a bigger boom.

Rounds can be short and fat, long and fat, short and skinny, long and skinny, rounded or pointed on the end. What you are measuring with a number, though, is the bullet, which is at the leading edge that exits the gun.

The letters or words that follow the number add more information. .357 Sig is so named because it was developed by the Sig Sauer company. .38 Special is so named to differentiate it from other .38 caliber ammunition already on the market at the time. The ACP in .45ACP stands for “Automatic Colt Pistol”.

.22LR is longer than its .22 counterpart, to fit more powder in the case. .44 Magnum has more force behind it than a .44 Special because of its longer case which fits more powder.

For a deeper dive into the parts and terminology of ammunition, see my article on the subject. For today’s discussion, you just need to know that ammunition is made of four parts

Colloquially, we call the whole thing a bullet, but the technical term for the thing you load into the chamber of your gun is a round or a cartridge.

What Happens When You Shoot a Gun

As background for the discussion, let’s see what happens when you pull the trigger. Since the revolver is the simplest sequence, I’ll use an excerpt from my article on revolvers:

The caliber of the weapon you are using makes a great deal of difference in your ability to accomplish the goal. We will explain the virtues of a variety of calibers, and then explore the best options for each activity.

I wanted to make you a chart delineating the top three calibers for each activity, but when I asked my resident FFL dealer for help, he informed me that I would be committing an act of heresy.

He showed me a 700 page book entitled Modern Reloading: Second Edition by Richard Lee that he bought at Cabela’s. It contains 37,000 different loads. Chris informed me that each load is someone’s baby and favoring one caliber for an activity is akin to choosing a favorite child.

With that caveat in mind, here is a sampling of the most common calibers and their uses, followed by description of common activities and the calibers that we like.

Your preferences will vary and availability will be a big factor. I am linking each caliber to a listing, when I find something in stock. Until the political scene settles down, there will be a huge demand for a small supply of guns and ammunition.

Be sure the listing does not say “backorder” before you add it to your cart. The wait could be weeks or months with some suppliers. We are a dealer, and even dealers are on a prioritized list right now. We have a wish list at several wholesalers.

.22LR: Easy to Find and Easy to Shoot

This little number is so small that it does not create felt recoil, making it ideal for new shooters to develop their skills without developing a flinch in anticipation of recoil. Best uses: plinking, backyard pests, target shooting. Get it at Optics Planet.

9mm: Big Enough But Not Too Big

This police favorite is an old standby due to its balance between power and recoil. It uses speed for stopping power. Best uses: police, concealed carry, home defense. Get it at Optics Planet.

This older caliber is hard to find but serviceable for those who find a .38 too powerful. Best uses: concealed carry, plinking.

.357 Magnum: A Spicier Round For Your Revolver

This semi-automatic round gives you more bang for your money. Best uses: concealed carry, home defense. Get it at Brownells.

This semi-automatic round increases the stopping power with a larger diameter. It moves more slowly than a 9mm because of its extra heft and slower burning powder but hits harder. Best uses: concealed carry, home defense. Get it at Palmetto State Armory.

This extremely large and heavy semi-automatic round generates serious recoil. Best use: shooting large, heavy things. Get it at Brownells.

This monster revolver round will get you noticed. It is LOUD and has serious recoil. Best uses: impressing your friends, shooting bears.

When you see the word magnum in a caliber name, you are getting extra powder for a bigger boom and more stopping power.

This little round is fast and has little recoil. Best uses: varmints, home defense. Buy it at Creedmoor.

This round is the standard NATO round for militaries around the world. Best uses: military, varmints, home defense. Buy it at Creedmoor.

Rifle enthusiasts like .308 because it is consistent between manufacturers. Best uses: hunting. Find it at Optics Planet.

The 30-06 was the standard caliber for military weapons during WWI and WWII. The round carried over into the civilian world as a potent hunting round. Best uses: military, hunting, longer range hunting. Find it at Optics Planet.

This caliber is common for hunting. Best uses: hunting with a bolt action rifle.

I was not successful in finding 6.5 Creedmoor because it is everyone’s favorite hunting round. It was developed with similar ballistics to the .308 but with a lighter recoil. Best uses: hunting, long range target shooting.

This kindler, gentler version of a shotgun still packs a whallop. Fewer pellets mean you have to aim better. Best uses: hunting, home defense, skeet shooting. Get it at Optics Planet.

This sucker will make you fall backward if you don’t expect the recoil. Best uses: hunting, home defense, skeet shooting. Get it at Optics Planet.

Choose the Caliber For the Activity

The best caliber for concealed carry is the one you will take with you. If you choose something you cannot easily or comfortably conceal, you won’t wear it consistently. If the recoil is too much, you won’t train enough to become proficient.

Popular rounds for concealed carry include .38 Special, .357 Magnum, .357 Sig, .45ACP, and 9mm. .32 is a viable possibility but is uncommon and this makes ammunition difficult to find.

.22LR is highly concealable and has no recoil but requires deadly aim and multiple shots to equal the stopping power of bigger rounds.

For further information on choosing the right gun for concealed carry, see my numerous posts on the subject, including this one.

With home defense you want a gun that you can get to quickly in an emergency. Rifles, shotguns, and handguns are all possibilities. A thief who visits our bedroom at night will be confronted with a .38 Special, a 9mm, and an AR-15 chambered in .223.

Other popular home defense rounds include 20 gauge or 12 gauge shotgun shells and handgun rounds as big as you like. Concealment is not required in the home so there is no need to use a small caliber.

Size is limited only by the space you have in which you can secure your gun away from the hands of children and intruders.

Plinking is shooting for fun. Gun enthusiasts with backyard ranges will set up targets, including tin cans and other metals that make a “plink” sound when you hit them.

.22LR is perfect for plinking because it has no recoil. You want lighter, cheaper rounds so you can shoot lots of rounds without discomfort.

The right caliber for hunting depends on the size of the game. If you are shooting squirrels and snakes, the small the better, so go for .22LR or even a BB gun.

Too small and you don’t make a kill, which causes the wounded animal to suffer more than necessary. Too large and you lose too much meat. .223 is not legal in some states for hunting because it does not provide a quick kill.

Be aware that great big rounds have serious recoil. Make sure the shotgun is right up against your shoulder so you don’t get knocked down when you shoot.

9mm is the standard police round, along with .38 Special and .40 S&W caliber. Military use depends on the activity. Snipers use .338 Lapua caliber for long range shooting.

Competitive shooting comes in various forms and may include running with your gun, switching guns, and even stopping to ride a bicycle or take a ski run during the competition. Tailor your round to the activity.

For example, in 3 Gun shooting, you use a handgun, a rifle, and a shotgun during the various stages of the competition. The NSSF Rimfire Challenge only uses .22LR to shoot steel targets with handguns or rifles.

Skeet shooting involves throwing a clay target in the air and shooting it before it lands. Shotguns throw out multiple pellets at once, giving you a better shot at hitting a moving target. Common calibers for this sport include 12 gauge and 20 gauge.

Getting Advice From a Professional

If all this information just muddies the water for you, reach out to your favorite gun enthusiast. They love to talk caliber.

For professional help, head down to your local gun shop or find an instructor in your area. Double Eagle Gunworks LLC provides onsite classes and one-on-one training.

Chris would be happy to sit down with you and show you the options. Then he can take you to our onsite range to shoot a sampling of the calibers available for your purpose. Contact us, join our newsletter, and visit our calendar page to see upcoming class dates. Check our website when you are looking for guns and ammo: shop.doubleeaglegunworks.org.