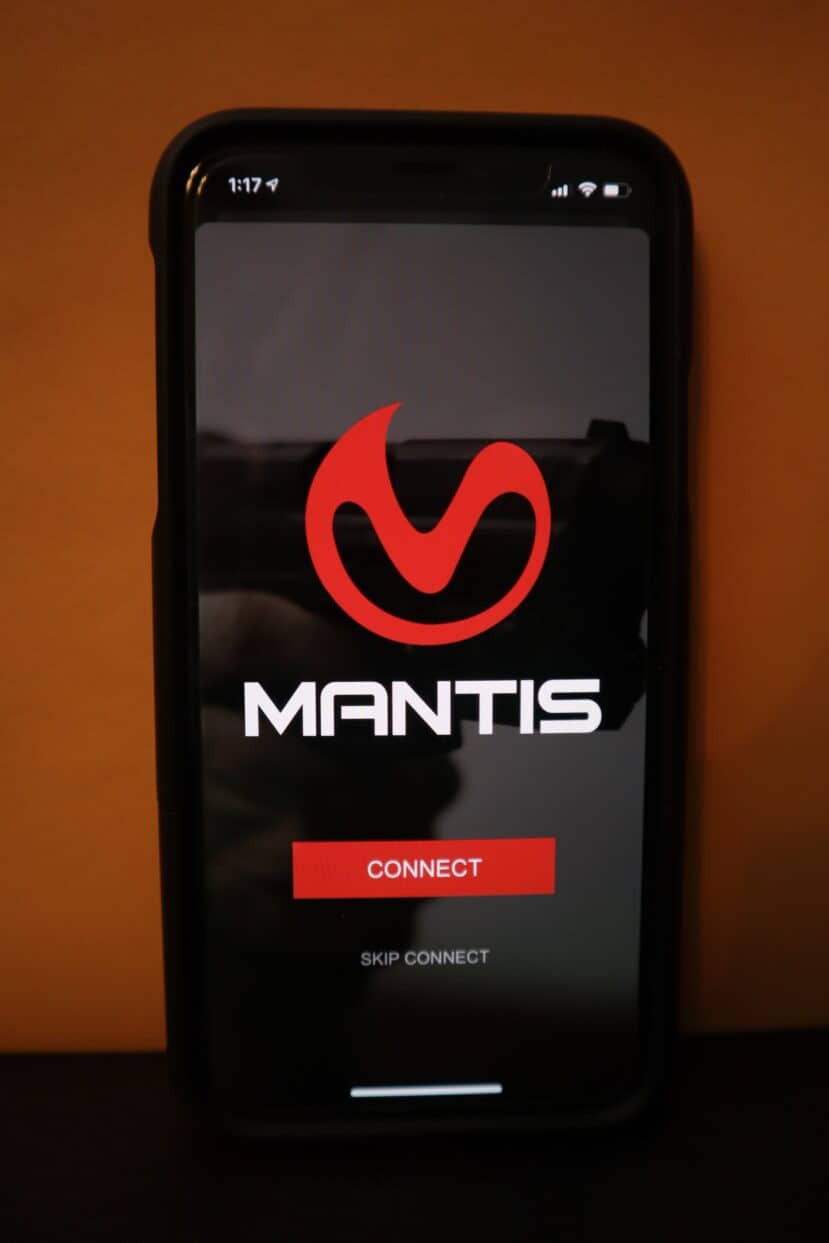 The Mantis X is a small device that attaches to the picatinny rail of your average pistol or rifle and measures your shooting performance. You can use it with live fire or with dry fire shooting. There is also a version that mounts on a shotgun.

The Mantis X is battery powered and USB rechargeable. You slide it onto the rail and tighten it with a thumb screw. You download the app to your smart phone and the Mantis X links with the smart phone via Bluetooth to evaluate your shooting.

It comes in a Pelican case lined with foam cut to the shape of the Mantis X device. We have the original version purchased in 2017, but you can find the latest version at stores now.

Find it at these locations:

How the Mantis X Works

You start by choosing the mode:

What the Mantis X Measures

The Mantis X gives you feedback on timeliness, trigger pull, and how steadily you hold the gun.

My husband Chris is a firearms instructor, so when he used the Mantis X Performance System to improve his shooting it gave him a few pointers. See how he did in our YouTube video.

I am a relative newbie, so I had a fairly steep learning curve. Both of us improved our scores with subsequent uses of each mode.

In the YouTube video Chris used an FN FNS-9 with 9mm rounds and a Sig P320 with .357 Sig ammunition. In our dry fire testing we used a Ruger SR22.

In this mode you get as many shots as you want at the speed you choose. You get a score that reflects your performance, with 100 representing perfect technique.

Chris got a score of 81.7 on his first use of this mode, with a report that he was slapping the trigger, pushing forward, and breaking his wrist down. On the second grouping his score was 92.7 and the app congratulated him for great shooting!

In the Benchmark mode you shoot 10 times and the app gives separate input on each shot. Chris scored 92.3 and was congratulated for great shooting.

In Timed Shooting you learn how long it takes you to make a shot. Chris scored an 87.7 and then a 92.3. The app informed him he had been slapping the trigger.

In the Compressed Surprise Break mode you aim at the target and then wait for a buzzer to sound. Chris averaged 78 and was informed that he was heeling and anticipating recoil.

In the In Battery reloading drill, you drop the magazine, load a new magazine, and shoot a round. Chris earned a 66.2 and learned that he was tightening his grip.

In the Out of Battery reloading drill, you start with the slide locked back before you drop a magazine, insert a new magazine, release the slide, and finally take a shot. Chris scored an 86.7. He was using too much trigger finger and thumbing.

The other modes allow two handed shooting, but in the Primary Hand Only drill you shoot with your primary hand. Chris averaged 85.5. He used too little trigger finger.

In this drill you use the support hand. Chris scored 82 and used too little trigger finger.

Each error comes with a description of what you are doing wrong and a video demonstrating how to fix it. Chris felt that the information was sound and improved his scores after making the adjustments.

My Experience Using the Mantis X

I have less shooting experience, so I thought I would give it a try and see what it said about my shooting skills too.

The Mantis X had ignored a few shots when Chris used it, so we thought it had a sensitivity issue. It ignored all of my shots the first time I tried it, so we looked in the troubleshooting guide to find out why.

First we allowed the app to report the missed shots. It took an email address and promised to respond to us after the developers had looked at our results.

With additional investigation, we learned that the app ignores shots that score below 50. Chris identified my problem as a too-fast trigger pull. Once I began taking my time, the app began recording my scores.

In the Open Training mode, I scored a 79. The app said I was using too much trigger finger, anticipating recoil, and heeling.

In the Primary Hand Only mode, I scored 65.1, which improved to 73 with practice.

In the Supporting Hand Only mode, I scored 63.7.

What I Liked About the Mantis X

I liked the relative simplicity of the interface. The display was very visual, with a movie showing how your gun moves while you shoot in one mode.

I liked that you have a choice between live fire and dry fire, greatly increasing how much use you can get out of it.

I liked the adjustability. You can switch between high and low sensitivity, live fire and dry fire, left and right hand, and pistol and rifle.

Chris reassures me that my errors are simply those of a new shooter and will improve as I spend more time shooting. I must confess I was not aware that I was too fast with the trigger.

The gun shoots every time, so I was unaware of the need to take more time getting to the moment of the trigger break. The point of slowing down is to have a smoother trigger pull rather than a jerky one.

The Limitations of the Mantis X

The Mantis X does not record shots which score below 50. This caused initial consternation because we thought it was not detecting the shots. It took some investigating to realize that I just was not meeting the minimum standard.

Revolvers are not made for accessories, so there is not a way to affix the Mantis X. A semi-automatic pistol must have a picatinny rail, also known as a pic rail, to allow you to attach the device. This means I cannot use the Mantis X with the revolver I carry every day.

Other Ways to Improve Your Shooting

Practice your shooting as often as you can. Get to the range for live fire training, and use dry firing as an additional practice mode. See my article on your first trip to the shooting range.

If your gun won’t do well without ammunition in the chamber, use snap caps, which are empty cases designed for shooting practice.

Take classes to learn more about shooting. Here is our course catalog.

Read books and watch videos about shooting. Our YouTube channel is a good place to start.

Use our coupon code “double10” to get 10% off your first purchase with these online retailers: