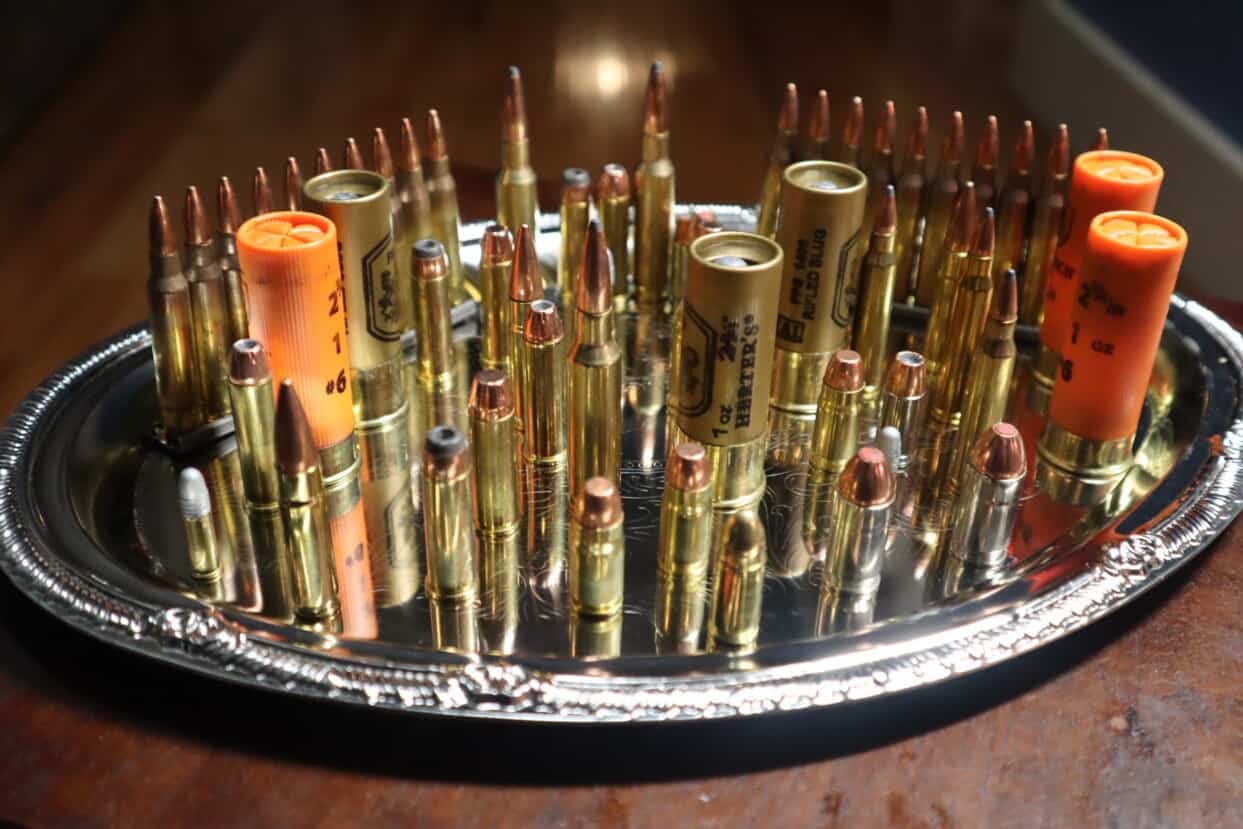 Traditionally, bullets were made of lead. Now you are more likely to use bullets with a lead core jacketed by copper You have to wash your hands after handling bullets to avoid getting the lead into your system.

Older solid lead bullets foul the inside of the barrel. Jacketed lead bullets limit the fouling of your barrel. Is it worth it to find a source of lead free bullets?

To have a viable alternative to lead bullets, you would need it to be:

We bought two kinds of lead-free ammunition and hand loaded a third box of bullets to see if the options currently available would meet the need.

Subject #1 is Hevi Duty Hevi-Shot 9mm Luger Frangible non-toxic ammunition with a polymer coating. It comes in a box of 50 Cartridges with a bullet weight of 100 grains and boasting a speed of 1250 fps.

It advertises match grade accuracy. Because frangible ammunition breaks apart on impact, it is safe to shoot at steel targets without fear of ricochet.

Subject #2 is Underwood Xtreme Defender 9mm +P Luger solid copper ammunition. It comes in a box of 20 cartridges with 90 grain bullets and boasting a speed of 1475 fps.

Why Lead is Harmful

According to the Centers For Disease Control and Prevention (CDC), lead is absorbed and stored in our bones, blood, and tissues. Very high levels of lead exposure lead to anemia, weakness, and damage to brain and kidneys.

Pregnant women are advised to avoid lead because it crosses the placental barrier and can damage a developing nervous system.

The term “mad hatter” refers to the fact that hat makers, otherwise known as hatters, used lead in the manufacture of hats. As a result of lead poisoning, they became rather eccentric.

The same is true of painters who used lead paints. Who can forget the story about the painter Vincent Van Gogh cutting off part of his ear giving it to a woman?

Why Lead is Used in Bullets

Lead has desirable qualities that make it the material of choice for bullets:

Lead bullets are typically encased in coatings. A full metal jacket (FMJ) round usually has a lead core. As long as the jacket doesn’t break apart on impact, it helps contain the lead, but eventually it will leach out into the target.

A total metal jacket (TMJ) with a lead free primer would be the most likely to avoid lead exposure, but the copper jacket will still split if it hits something hard enough to make the bullet mushroom.

A polymer coating can be baked onto a lead bullet for less lead fouling at a lower cost than copper jacketing. There is no exposed lead.

Solid copper is the logical choice for replacing lead in a bullet, now that technological advances have allowed grooved bullets that roughly resemble the tip of a Phillips head screwdriver. The grooves improve the accuracy of the bullet and its ability to penetrate the target.

Another option is gilding metal, which is 95% copper and 5% zinc. Copper is lighter than lead, so the same weight will take up more space, resulting in longer and harder bullets.

Tin and brass are other ingredients used in lead free bullets.

Polymers (plastics) can be formed into bullets.

In the wake of the rioting and political uncertainty of the 2020s, guns and ammunition have become hard to get your hands on, and prices are rising.

I compared our three subjects to comparable ammunition. I show you the prices for election day 2020, so who knows what they will be when you read this?

I’m giving you multiple links for each where possible as just about everything for a handgun is back ordered on just about every website. Keep checking until you get lucky.

As a price comparison I found Hydra-Shok 9mm Luger self defense rounds.

The price of ammunition right now is a lot like the price of gas, with every event changing it, but on the whole there is a small premium to pay for lead-free.

Don’t put much stock in which merchant is highest or lowest today because it was probably just a matter of where they were in adjusting the prices when I happened to look.

Copper bullets are longer than lead bullets, requiring faster spinning for stability in flight. The twist rate is the rate of spin inside the barrel of a firearm. Too slow, and accuracy suffers.

With the longer bullets you have less space in your case for powder. This can be remedied with more compact or faster burning powder charges.

Monolithic (solid) bullets have less tendency to shed weight on the way to the target by leaving a bit of the material behind in the rifling. This means an initially lighter bullet can still have a heavy impact on the target, allowing for deeper penetration.

The wound cavity created by a lead core bullet and a solid copper bullet are very similar. Both cause similar sized central cavities which are created when the bullet passes through tissue.

The two bullets also cause similar sized temporary cavities. These are the cavities that are generated by the shockwave created by the bullet as it passes through tissue.

To find out whether the lead is only in the bullet, let’s look at the constituents of a round, or cartridge, of ammunition: the projectile, the case, the primer, and the powder. For a more in-depth discussion of all four, see my article about ammunition.

The projectile is the bullet itself, the part that leaves the barrel of the gun and heads toward the target. Lead free bullets are the subject of this article.

The case is what holds the whole package together. It is retained in the chamber of a revolver or ejected from the ejection port of a semi-auto pistol when you shoot. Cases are made of brass, copper, steel, aluminum, an alloy of mixed metals, plastic, or even paper. They are not made of lead.

The primer is the part that ignites the gunpowder in order to cause the explosion that propels the bullet. It can be a chemical or electric component.

The propellant in the cartridge could be gunpowder (black powder) or smokeless powder. Gunpowder is made of sulfur, charcoal, and potassium nitrate. Low lead and lead free propellants are available.

I looked for a resource that explores the regulatory issues around lead in bullets and found huntingwithnonlead.org. I discovered that nonlead ammunition is required throughout the US for waterfowl. Thirty five states have additional rules about lead.

Will Lead Free Bullets Catch On?

When ammunition becomes bountiful again, I suspect people will be willing to look at nontoxic options. It is also likely that politicians will become involved in deciding how much lead is allowed in ammunition.

Politics aside, it is better to avoid lead exposure whenever possible. No lead in your bullets means no worries about your backyard shooting range polluting a nearby creek. It also means no lead fouling on the inside of your gun.

What Happened When We Loaded Our Own Lead Free Bullets

Looking around at various forums, I found that not everyone likes the way nontoxic ammunition shoots. Some people find that their guns don’t like the longer shape.

We did not have difficulty loading and shooting lead free ammunition in our testing. Reloading the solid copper bullets into standard cases did not pose a problem. Accuracy was similar to lead ammunition, but speed suffered slightly.

Lead free bullets are good enough to use in their current state and are likely to get better as manufacturers continue to develop them. The price difference is not outrageous.

We recommend trying them as soon are you are able to find some.

Contact us to set up your class. Join our newsletter for updates. Find our Double Eagle Gunworks channel on YouTube for more helpful information about guns.