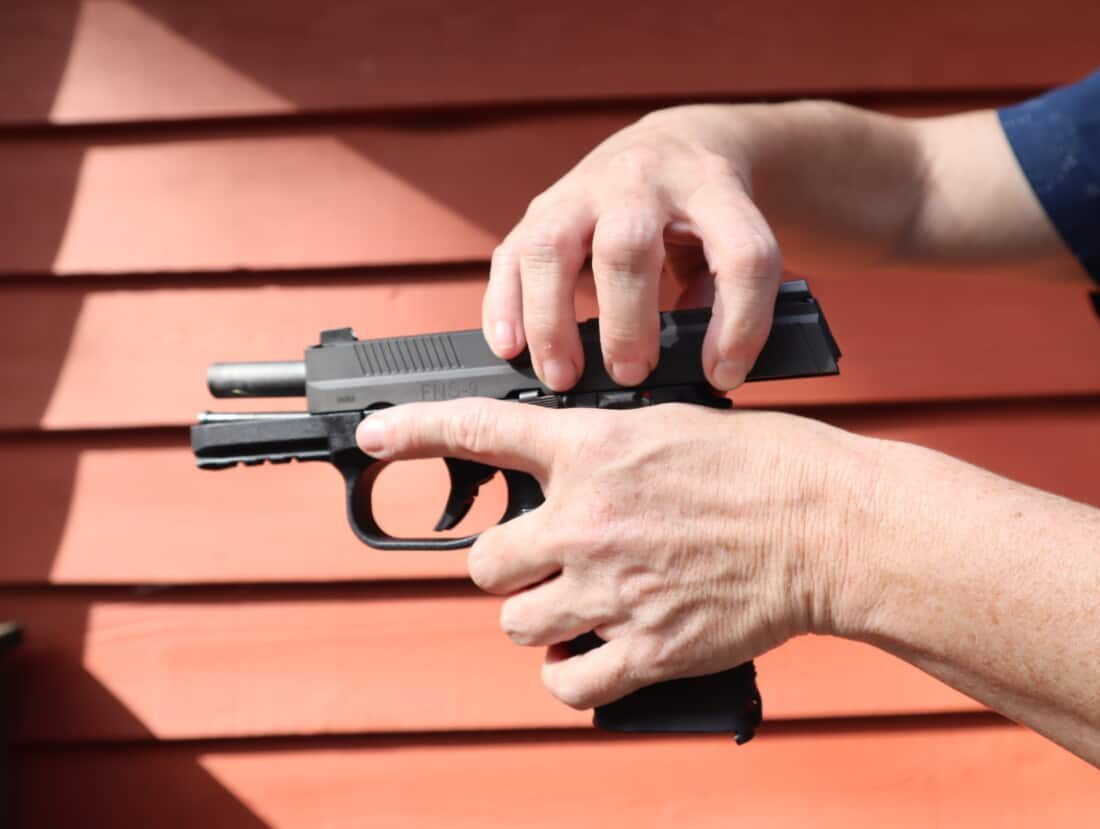 Learning the mechanics of a gun can cause anxiety. Racking the slide on a semi-automatic pistol is tricky, but it can be done without pinching your hand.

The muzzle of the gun should be pointed in a safe direction, because we always treat every gun as if it is loaded.

Method One: The Standard Grip

Grasp the gun by the grip with your shooting hand as if getting ready to shoot. The trigger finger should be alongside the frame, not on the trigger.

This is best accomplished standing, with the gun close to your body for proper support, but not right up against you. It might find something else to pinch.

Place your nonshooting thumb on one side of the slide and the other four fingers on the opposite, maintaining a respectful distance between your palm and the slide.

Pull the slide backward and then let go so that it will snap back into place and chamber the round. Be prepared for this snap to be very snappy.

You can vary your grip by placing your fingers farther back on the slide. The thumb is still opposite the four fingers, but now you are using a pinching grip.

My Own Experience With Racking the Slide

When I was exploring the idea of carrying a gun, I casually mentioned to my husband that it might be good to go look at a few, just for information.

That was like offering a snack to a hungry teenager. His eyes lit up, his pulse quickened, and I found myself in a gun store.

Gun store owner number one was helpful and informative. He explained the models on display and how they could be concealed. His recommendation was a small semi-automatic pistol.

I handled a few and gingerly racked a slide or two. My husband had shown me the right way to do it, and I wanted to feel the difference between the various models. The slide is the movable part on the top of the gun that you pull back to move the first round into place.

As a lefty, I tend to approach the world from a different angle. I placed my right hand atop the slide with a respectable distance between my palm and that big hole in the top (the ejection port, where the spent round will be ejected).

The left hand supported the gun from below as the right hand moved to lock the slide back. It worked, but not without effort.

So far, so good. Then we went to store number two.

There is a stereotype in the gun world that the guy behind the counter would have preferred to be a secret agent or a police officer and will take out his disappointment on innocent customers.

I have met some very helpful salesmen in the gun stores, but this guy fit the stereotype.

When I explained my desire to avoid the stiffer slides due to my small and not especially strong hands, he informed me that I was using the wrong approach.

I should move the gun forward and the slide backward at the same time with opposing hands for maximum effectiveness with minimum effort.

Because I was concentrating on moving both hands in opposite directions, I did not maintain proper form, and my palm flattened against the open area of the slide as it moved, sandwiching my skin between one sharp piece of metal and another when I let it go before I moved my hand out of the way.

It took a while to get me back into a gun store after that. That is why I now carry a revolver.

But you don’t have to make the mistake I did. You can learn it right the first time and never listen to someone who tells you that you can rack any gun you want just by changing the position of your hands.

A stiff slide requires larger, stronger hands. You can do exercises to strengthen your hands, like a grip strengthening device that resembles a big plastic nutcracker.

That will work eventually, but meanwhile you need a gun whose slide you can rack reliably now, when you need it, and especially in an emergency situation when your nerves are on edge.

The push-pull method the gun store guy showed me does work, and women with small hands can use it, but I did not know enough about the gun even to understand what the goal of racking the slide was.

Education is Key to Understanding

If you are like me, and you don’t even understand why you are racking the slide, you have a good chance of pinching your hand.

Here is a photo of a Sig P320 with the slide separated from the frame for cleaning. The recoil spring takes up half the length of the slide, seen here on the left. You can see the whole article about cleaning a semi-automatic at this link. What I want to show you here is the moving part.

When you insert a magazine full of ammunition into the grip of your gun, it is not yet ready to shoot. You have to get a round into the chamber. This is a spring loaded process.

Here is a photo of an FN FNS-9 with the slide racked and the slide lock holding it in position. The open area is where the round goes when the gun is loaded. That is the area that will pinch your hand if you are not careful.

When you grasp the slide with your nonshooting hand, be sure to keep your palm well away from the opening in the slide. You will pull back on the slide, essentially the whole top part of the gun, and it will move backward.

This can be an easy movement with a small semi-automatic such as the Ruger SR22. It can also be a bit of a fight with a big gun such as the FN FNS-9.

In the cover photo for this article, I cheated by using the slide lock to hold the slide back so I could show you how it looks to rack the slide. In this photo I am actually holding it back myself while I wait for the camera to snap the photo.

See how the effort stresses my finger muscles. I have actually disassembled this gun before, so I can do it, but it does take concentration.

Larger hands will have the strength to rack a big slide, and will need extra room on the grip for proper positioning. My husband would be very uncomfortable with a pocket pistol.

He prefers something along the lines of a compact P320 for concealed carry. Smaller hands will prefer an easier-to-rack model such as the Smith and Wesson Shield EZ 9mm. The smaller frame will be no problem for shorter fingers.

In the photo above you see a loaded magazine on the left and an unloaded one on the right with the follower waiting for a round. The follower spring is just below the follower.

When you shoot your gun, the same activity occurs automatically. The energy of the explosion of the gunpowder drives the slide back, compressing the recoil spring.

As the slide moves backward, it grabs the spent casing and flips it out of the ejection port. When the slide reaches the back, the recoil spring pulls it forward.

The opening in the slide goes over the top of the magazine, allowing the follower spring in the magazine to push a new round up. When the slide is back into battery, it chambers the next round.

The gun is ready to fire again. After the entire magazine is emptied, the slide catches on the slide lock, which stops it from going forward. Now the slide is locked in the open position so you can see that it is unloaded.

Find A Gun That You Can Operate Comfortably

Before you choose your pistol, handle several in different models and sizes to get an idea of the effort involved. If you don’t like racking the slide, go down to a smaller model.

Consider a revolver if you can’t imagine yourself racking the slide on a regular basis. See my articles on the relative merits of the semi-automatic and the revolver for a deep dive into the subject of which type to carry.

Take your time deciding, and pay a visit to the gun range to rent one or two that you are thinking of buying.

When you are ready to choose a gun, or if you need to learn to use the one you have, contact Double Eagle Gunworks LLC. Chris would be thrilled to take you gun shopping or set up a class for you. Sign up for our newsletter to stay informed of upcoming events.

See our calendar to sign up for a Concealed Weapons Permit class. For informative videos on gun related topics, visit the Double Eagle Gunworks channel on YouTube.