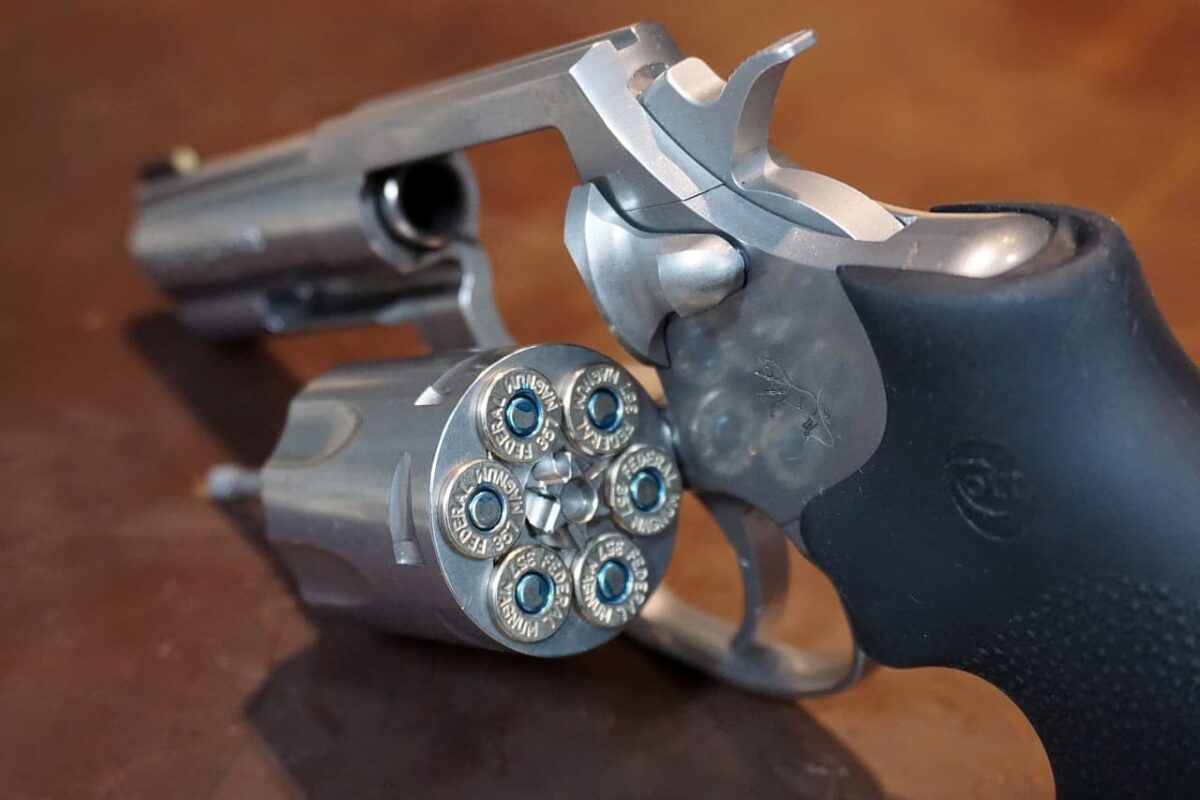 Among gun connoisseurs you will find a deep divide between those who favor semi-automatics for concealed carry and those who would prefer a revolver.

The case for the revolver comes down to its five biggest assets: attractiveness, familiarity, ease of use, reliability, and power.

As a woman, I want everything I wear to be attractive, including my gun. It doesn’t matter that you can’t see it. My Ruger LCR .38 Special looks good snuggled tightly into its holster. The rounded lines fit me better on an aesthetic level. I especially like the copper wheel that adds a subtle touch of bling.

Not all women prefer revolvers, but they have made a resurgence in the last decade with lots of newbies starting to carry and finding the revolver, well, friendlier.

Besides the beauty of the curved lines and the hand-shaped grip you have the familiarity of the revolver. We grew up watching the good guys carry revolvers on television.

Andy Griffith and his deputy Barney Fife used a Colt Detective Special to protect the sleepy North Carolina town of Mayberry; the Lone Ranger patrolled the Southwest with Tonto carrying a pair of Colt .45s, and Charlie’s Angels fought crime while staying stylish with a Smith and Wesson Detective Special.

The revolver is simpler to use than the semi-automatic. To quote old camera commercials, it is pretty close to “point and shoot.” You load the rounds directly into the chamber, close the cylinder, rotate it into place, point it at your target, and squeeze the trigger.

The semi-automatic has the additional barrier of racking the slide, which can be tricky to learn. The more intuitive approach to loading the revolver is easier for those who are not accustomed to handling guns.

A double action revolver removes the step of cocking the hammer. Pressing the trigger cocks the hammer, rotates the cylinder to a fresh round, and releases the hammer to fire the gun.

I opted for an exposed hammer on my double action revolver so that I have the option of cocking the hammer myself if I need an easier trigger pull, and just because I like to have options.

You can get a double action revolver with an internal hammer. You won’t see the hammer on the outside of the gun and it won’t snag your clothing if you draw the weapon awkwardly.

Some revolvers can handle multiple calibers. A .357 Magnum revolver can also accept .38 Special rounds. A .44 Magnum can take .44 Special. See my blog on the different types of ammunition.

You can see whether a revolver is loaded without opening the cylinder.

Cleaning a revolver does not require disassembly. A revolver retains spent casings, so you don’t have to go find them after you shoot.

The reliability of the revolver is a big plus. With fewer moving parts, it won’t be as likely to malfunction. For the most part you can correct revolver malfunctions by opening the cylinder and removing the round. See my prior article on how to deal with common semi-automatic malfunctions.

The revolver is more accepting of variations in ammunition because of its simplicity. You load the chamber and close the cylinder, then shoot it through the barrel without further need for repositioning.

The semi-automatic has to draw each round from the magazine into the chamber in a more complicated procedure that lessens its toleration for variations in shape and and weight. A revolver can use semi-jacketed hollow points, semi-jacketed soft points, and other shapes that won’t feed well in a semi-automatic.

The Power of the Magnum

Revolvers are available in Magnum calibers, which have longer cases than the corresponding caliber not labeled Magnum. This allows more powder for a more powerful impact on the target at a faster speed.

You can find revolver rounds in .32 H&R Magnum (versus .32 ACP) and on up all the way to .500 S&W Magnum, which is half an inch in diameter with an extremely powerful load.

The Variety of Revolvers Available

Revolvers come in multiple barrel lengths, from the 1.5″ Derringer of the Old West to a whopping 16″ barrel on the Colt Buntline worthy of Yosemite Sam.

Typically you will find a nice balance between concealability and snappiness in a barrel that is about two inches long. A shorter barrel means more kickback because there is less mass to resist the velocity of the outgoing bullet. You feel the extra force in your hand when you shoot a smaller gun.

Revolvers come in calibers ranging from the diminutive and virtually kickback-free .22 (that’s .22 inches in diameter) to the monstrous .500 put forth by Smith and Wesson.

A .22 is sometimes used for self defense but most shooting instructors will steer you away from such a small cartridge because of its limited stopping power. You want to drop your assailant with the first bullet if you can, and a .22 will take longer to register in the mind and body of an attacker who is full of adrenaline.

The .500 is designed for big game like elephants and would pack a huge punch when shot. You will likely sport bruises for a while after using that one. For carrying concealed, a .38 revolver is a nice balance between power and punch.

The trigger pull weight is heavier for a revolver than a semi-automatic. This can be a drawback if it interferes with your form, but it is also a safety feature as it it very difficult to pull the trigger on a revolver accidentally.

Revolvers can be heavier than a similarly sized semi-automatic because revolvers are often made of steel and semi-automatics are more likely to be made of polymer. The lighter weight is easier to carry but contributes to more felt recoil.

‘The rounded lines of the cylinder do make a bulge under your clothing, but this can be overcome with proper planning. I carry my Ruger LCR in a kangaroo style pouch that wraps around my waist and suspends the gun in a pocket over my belly.

I can choose light concealment by situating it at my waist and wearing an untucked shirt over it, or lower it to the hipline for deep concealment.

Some revolvers are small enough for pocket carry. If you choose this route remember that you must have it in a holster in your pocket and reserve that pocket for only your gun. Friction holsters are good for pocket use.

Carrying gum, keys, and pens in the same pocket make it harder to draw the gun and may cause foreign items to get into the barrel and cause problems with the function of the gun.

Because there is no magazine in the grip, a revolver can have a smaller and more concealable grip shape that fits your hand better. This will be more comfortable and may improve your accuracy.

Read my blog about how to carry concealed for men or women to get more ideas on concealing your revolver.

The lower capacity of the revolver is the sticking point for most concealed carriers. With a semi-automatic you can get a small profile and still carry 16 rounds. A snub-nose revolver is going to carry five or six rounds.

You don’t have a magazine with a revolver, so carrying extra rounds means loose rounds in your pocket unless you carry a speed loader with you. On the other hand, loading a revolver is not painful because you just slide the round into the chamber.

My husband, a serious gun dude, prefers the slim lines and larger capacity of the semi-automatic. He carries a Sig Sauer P320 Compact in .357 Sig most days and finds it easy to position it on his belt with his menagerie of tools: a flashlight, several knives, his cell phone, and anything else he can find that comes in a belt-mounted holster. The straight lines of the semi-automatic suit his taste.

Whether you choose a revolver for your everyday carry gun or opt for a semi-automatic, be sure to practice often and follow all the safety rules.

When you are ready for personal instruction, contact Double Eagle Gunworks LLC. Chris will help you pick out your weapon of choice and learn how to use it. Subscribe to our newsletter for information on upcoming events.

Check our calendar to find a Concealed Weapons Permit Class or call to set up a private consultation on the topic of your choice. Watch the Double Eagle Gunworks channel on YouTube for informative videos on gun related topics.

As a Federally Licensed Firearms Dealer, Double Eagle Gunworks LLC can help you buy or transfer a firearm.

If you want to buy a revolver online, try Cabela’s. Even better, buy directly from us at shop.doubleeaglegunworks.org