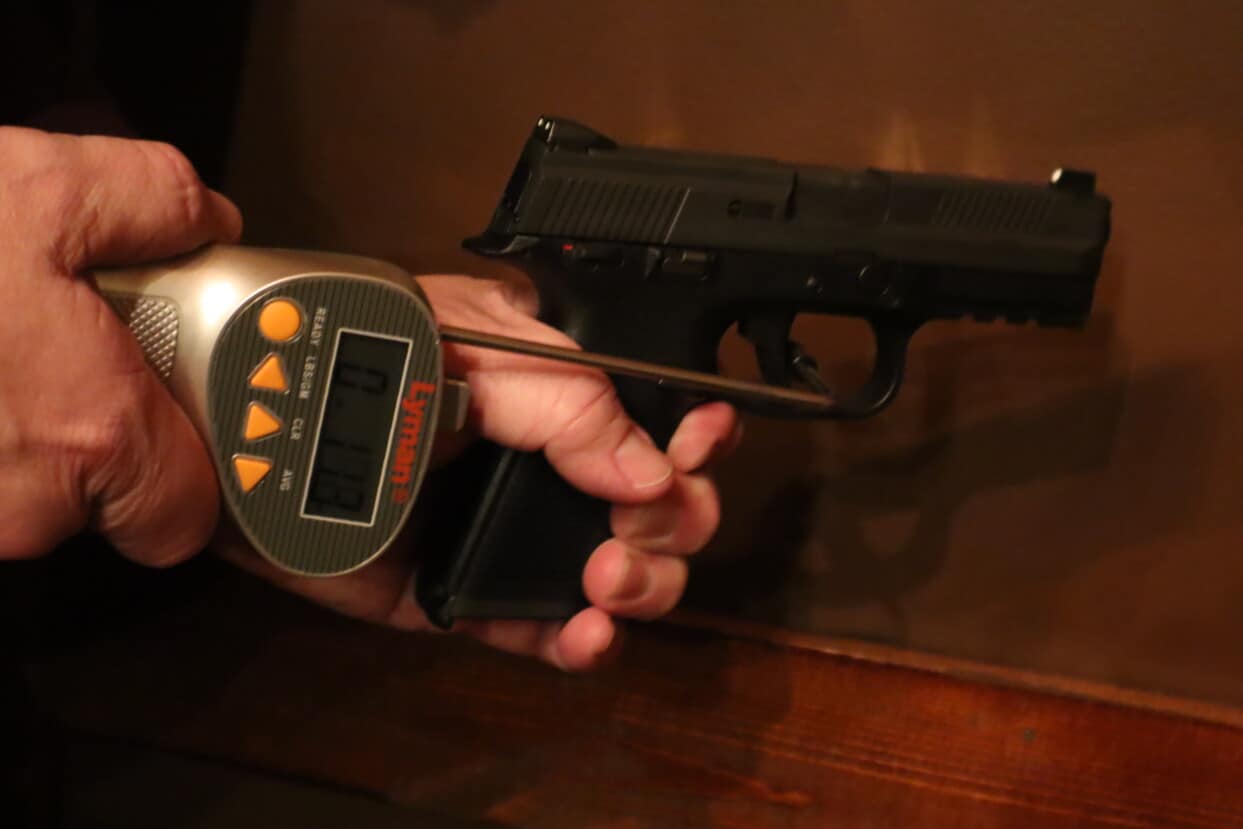 A common concern for new concealed carriers is how much effort it takes to pull the trigger. Rifles and shotguns tend to have a light trigger pull and a big boom, whereas smaller guns can be a workout for your index finger.

To measure your trigger pull, you need a trigger pull gauge. Clear the chamber of your gun and double check to make sure no ammo is in your gun or magazine. Point the gun in a safe direction.

Use a consistent pull rate each time. We measured each trigger pull weight three times and the gauge averaged the score to account for slight variances in technique.

We bought the Lyman Electronic Trigger Pull Gauge. You can find it at

Another popular model is the Wheeler Trigger Gauge, available at

You can get the Lyman Mechanical Trigger Pull Scale, available at

Or the Wheeler Mechanical Trigger Pull Scale, available at

How A Trigger Pull Gauge Works

The trigger pull gauge is basically a scale that measures pressure. When you step on the bathroom scale, you exert pounds of pressure to move the dial on the scale to a number that represents your mass.

When you pull the trigger with your index finger or with the arm of the trigger gauge, you exert pounds of pressure to move the trigger blade far enough back to release the firing pin that hits the primer to ignite the explosion that shoots the gun.

Like your bathroom scale, the trigger pull gauge can be found in electronic or mechanical models. The mechanical model will be less expensive and will not need batteries. The digital will be more precise.

We measured the trigger pull for revolvers, semi-automatics, rifles, and shotguns we own and put them in a chart so you could get an idea of what to expect when you purchase your next firearm.

You may end up using your double action/single action in single action only because eventually your finger starts to hurt. You won’t be able to shoot as many times in a row as you like if your finger is tired or sore.

If the trigger pull is stiff and your hands are weak, you might find that you can’t pull the trigger at all.

If the trigger pull is too stiff, you may compensate with poor technique. You may not place your finger correctly, and then you won’t be able to control the follow through. The result will be poor aim due to extraneous movements.

On the other end of the spectrum is the gun that goes off too easily. In the midst of a scary situation you may find your trigger finger control goes out the window and you insert your finger in the trigger before you have decided to shoot.

A hair trigger is so called to emphasize that something light is enough to activate it, though hair is a bit too light for that. A hair trigger may go off before you intend to shoot because of a nervous trigger finger.

The other reason to avoid a hair trigger is because it could go off without involving your finger. You don’t want something in your pocket to brush against a too-light trigger and blast a hole in…whatever is in its way.

That, by the way, is a good reason never to make your gun share a pocket with anything else.

You also don’t want your gun to go off if you drop it.

Other Factors to Consider

The distance from the place where your palm rests against the grip to the trigger is the length of pull. My fingers are much shorter than my husband’s so he and I prefer different lengths of pull.

A fat, rounded grip takes more room in the palm of your hand. That’s great for my husband’s large hand. A straighter, more compact grip works better for me.

The Weight of the Gun

Most people find that full-sized handguns are easier to shoot than small ones. That’s because the weight and size of the gun balance the effort needed to pull the trigger. A bigger, heavier gun also has less recoil.

The Smoothness of the Trigger

A better trigger makes the trip backward without stacking, which is jerkiness of movement. The smoother glide feels like less pressure because the effort required is constant rather than in spurts.

The Size of the Grip

The grip can be too long or short as well as too fat or skinny. A misfit in the grip will make the trigger pull seem more effortful.

Can Trigger Pull Weight Be Adjusted?

You can get a “trigger job” from a good gunsmith that will smooth the action of the trigger. It will only shave off a small portion of the actual trigger weight but the feel of shooting will improve enough to make it seem like a much lighter pull.

You can have a gunsmith replace your trigger with a nicer model, which will improve the feel and possibly alter the pull weight as well.

Use caution when adjusting the pull weight, because you don’t want to end up with a too-light trigger pull that can cause an accidental discharge. The stiff trigger on most revolvers is the reason you don’t hear about people dropping a revolver and shooting someone as a result.

You want about three to four pounds of pressure for a single action handgun trigger in order to balance the effort of pulling the trigger with safe predictability.

To make sure you get a gun with the right amount of trigger pull weight, shop carefully. Ideally you will be able to shoot the model you want to buy before you make a purchase.

Look up the model you are considering at the manufacturer’s website and you may find the trigger pull weight listed in the specs.

If you are in the Upstate of South Carolina, Double Eagle Gunworks LLC can help. Contact us if you want Chris to take you gun shopping. He can also provide private lessons to get you started shooting. Check our calendar to enroll in our next CWP class when you are ready to start carrying a concealed weapon.

Keep reading my blog and watching our YouTube channel for more on-point information about topics that interest gun owners. Subscribe to our newsletter to stay informed.